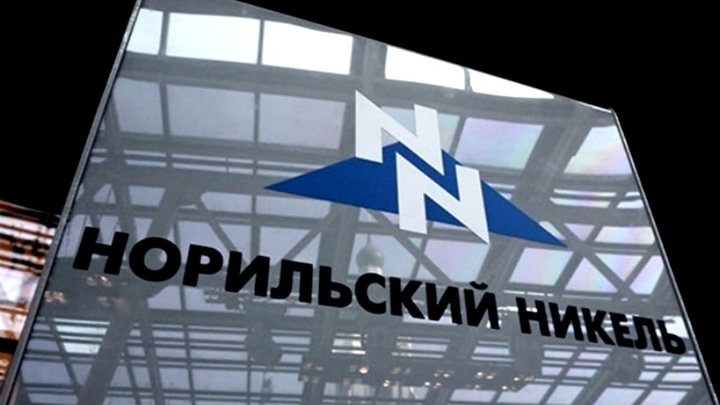 At the previous trading session, shares of MMC Norilsk Nickel rose 0.67%, closing at 26,824 rubles. The paper looked at the market level, adding 0.4%.

On Thursday, Norilsk Nickel shares broke through the level of 26,800 rubles. The picture of the previous days was repeated – at the beginning of the session there is an impulse of growth, and the rest of the day the securities are consolidating.

Fixing above 26 800 rubles. – a positive signal, but there is still a good level of 27,000 rubles ahead. With its breakdown of significant resistances up to 28,000 rubles. difficult to define. This morning there is a favorable background for a further rise in shares of Norilsk Nickel, but full confidence that 27,000 rubles. will be taken outright, no. It may be necessary to unload the indicators in the side beforehand.

On the daily interval, the strength on the side of buyers, only 27,000 rubles separates quotes from movement to historical highs. On the weekly timeframe, the stochastic gives a sell signal, but there are no more reliable indicators of correction yet. 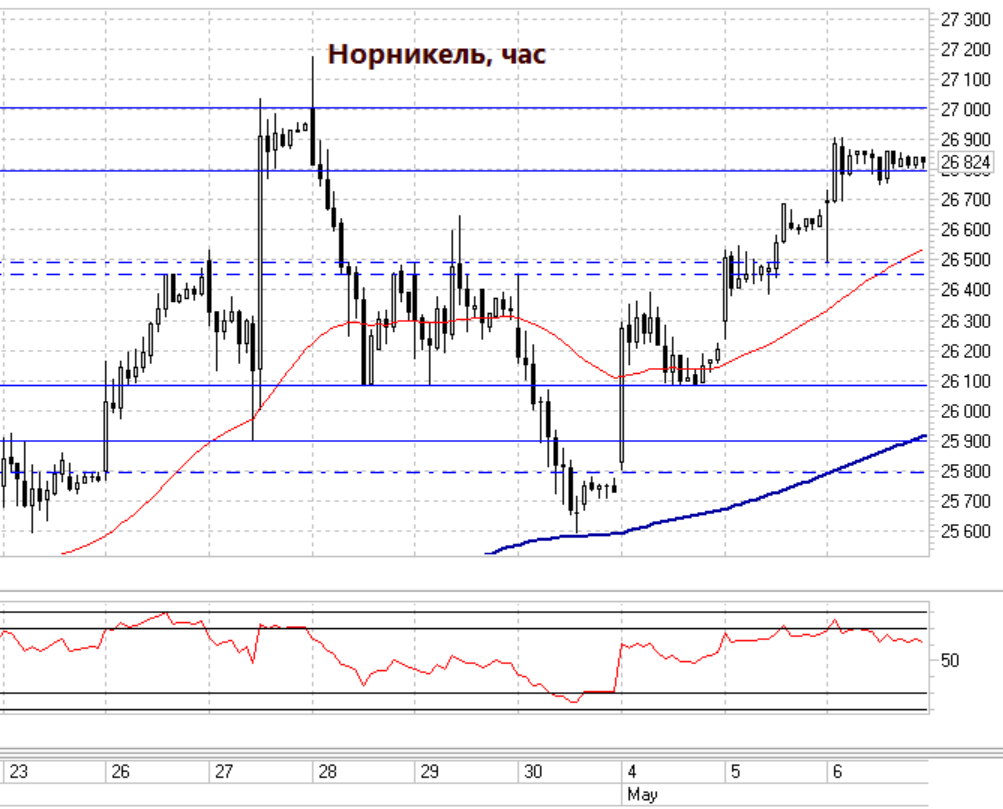 The external background is moderately positive this morning. American indices rose after the close of our main session on Thursday. Asian markets are trading in positive territory today. Futures on the S&P 500 index are up 0.1%, Brent oil is up 0.7% and is near the level of $ 68.6. All this suggests that if the external background persists, the opening will take place near the previous day’s close or slightly higher.

Since 2009, Norilsk Nickel shares have been in a big up-trend. Growth impulses alternate with periods of sideways consolidation, drawdowns are quickly redeemed, indicating the strength of the trend.

Trend indicators on the weekly timeframe look up. The last correctional wave at the end of February was caused by the news about flooding of Norilsk Nickel mines. Due to the incident, the production plan for 2021 was reduced. However, the successful completion of the second phase of rebuilding work at the end of March and the confirmation of the production plan provoked a rebound. At the moment, the negative driver is largely already included in the prices.

In the first half of April, Norilsk Nickel announced that work at the Oktyabrsky mine had resumed. This became a positive driver for quotes. Thus, the risks of disruption of the terms of restoration of works were greatly minimized. In addition, the company announced the launch of a $ 2 billion buyback. The buyback factor may support Norilsk Nickel shares until mid-June.

On the positive news, the upper limit of consolidation was broken since the end of February – 24,500 rubles. With its breakdown, the technical picture has improved, the next growth target can be designated 27,000 rubles. 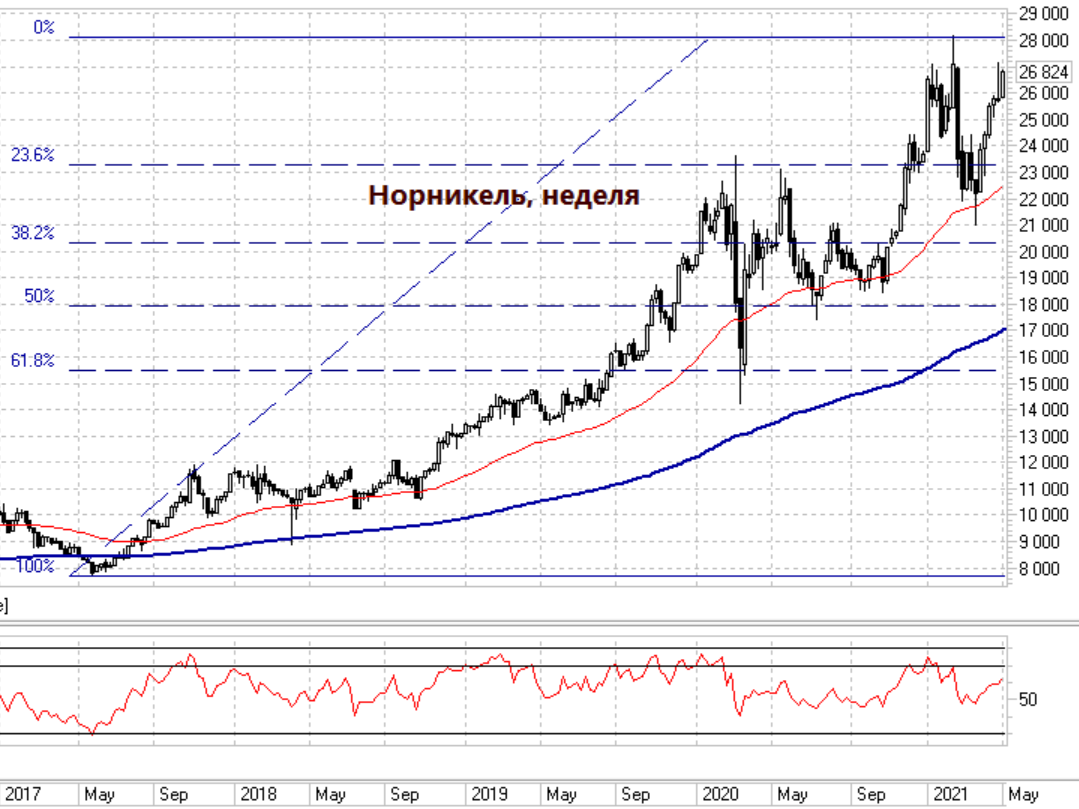 Previous story :Breakdown of resistance at 1.3914 will strengthen bullish sentiment in GBPUSD

Next story :Central Bank of Iran bans trade in cryptocurrencies mined in other countries

EUR / USD The European currency is growing against the US dollar during today’s Asian session, renewing local highs since January 14 and developing the “bullish” momentum that formed at the beginning of this trading week. The single currency practically did not react to the ECB meeting the day before, which, however, fully coincided with […]

Trading results At the previous trading session, shares of MMC Norilsk Nickel rose 1%, closing at 23,396 rubles. The security looked at the market level, adding 1.31%. Short-term picture At the start of the trading session on Thursday, Norilsk Nickel shares opened with a gap up on a positive external background. It was not possible […]

Current dynamics Gold quotes are consolidating at around 1858.00. The significant downward correction in all defensive assets, including gold, was due to several reasons. The first factor was the relative relaxation of political tensions in the US after the US Congress officially approved the election results, according to which Joe Biden will become the next […]

Forecast of the ruble, euro and oil prices

The EUR / USD pair successfully tested the 1.2000 support and closed Friday with a bullish engulfing signal, signaling that the desire for quotes to rise more and more. While the reference point for growth is the resistance at 1.2350: The USD / RUB pair still pushed off the resistance level of 76.00 and now, […]

EUR / USD The European currency is showing active growth against the US dollar during today’s Asian session, developing a strong “bullish” signal formed the day before and renewing local highs since March 3. The US dollar continues to weaken against most of its main competitors as investors show restrained optimism towards the global economy […]

On Wednesday, May 12, by the end of the day, the euro fell 0.64% against the dollar, to 1.2068. Most of the time, the price hovered around the 1.2130 level. The demand for the American currency increased at 15:30 Moscow time after the release of data on consumer inflation in the United States, which significantly […]

The Russian stock market is aimed at continued growth

For yesterday, the Russian stock market can definitely put a fat plus. On the Moscow Exchange Index, we added a percentage, while America lost the same amount. The reason for the sale of American securities was the statement of the US Treasury Secretary Janet Yellen about the possibility of raising the key rate, so as […]

The stock market is now overbought, a correction can begin at any time

Yesterday can again be included in the asset of the Russian stock market. Despite the overheating and vague external background, the Moscow Exchange Index managed to add 0.4% at the end of the main session, which was largely due to a slight increase in oil in the afternoon. But the growth was not uniform. Rosneft […]

The official exchange rate of the dollar and euro against the ruble as of April 7, 2021

The official exchange rate of the US dollar against the ruble, set by the Central Bank of the Russian Federation on April 7, fell by 22.50 kopecks and amounted to 76.3802 rubles, the euro rate increased by 18.63 kopecks to the level of 90.1821 rubles. More forecasts and news on the Fortrader channel in Telegram […]

Electric car maker Tesla sold part of its assets in the first cryptocurrency for $ 272 million, according to the quarterly report for the first three months of 2021. The company estimated the profit from the sale of digital gold in the amount of $ 101 million, writes forklog. The sale of BTC, along with […]

Current dynamics Gold prices are showing a slight decline during today’s trading in Asia, retreating from local highs since March 25, updated the day before. The quotes are still supported by volatile positions in the US currency, which started trading in April with uncertainty, despite the publication of strong data on the labor market and […]

Start of the day on the Russian market. Blue chips are getting cheaper

The official exchange rate of the dollar and euro against the ruble as of April 27, 2021

The official exchange rate of the US dollar against the ruble, set by the Bank of Russia as of April 27, was 74.7680 rubles (-32.13 kopecks), the euro exchange rate is 90.4468 rubles (-2.08 kopecks). More forecasts and news on the Fortrader channel in Telegram Market forecasts, analytics and stock news

Market the day before The trading dynamics were multidirectional. At the same time, the index of the Moscow Exchange managed to update its maximum. Shares of Lenzolot (LNZL 33,010, + 9.96%) again became the growth leaders. The outsiders were the papers of IDGC of Center (MRKC 0.395, -9.57%) due to the closing of the dividend […]

Start of the day. Stocks are getting cheaper, the ruble is getting more expensive

MOEX Index: 3420.43 (-0.39%) RTS Index: 1459.23 (+ 0.27%) The Moscow Exchange index declines at the opening of trading on Wednesday. The deterioration of the external background affects, while the market is still weakly reacting to the sanctions threats. American indices have been retreating in recent days, corrective sentiment is growing in other stock markets. […]

Bears in GBPUSD hit the support level at 1.3900

Paying attention to the 4-hour chart, you will notice that: from about the middle of the American session on Thursday, bearish sentiments have been dominating in the GBPUSD currency pair, at the same time, the bears do not have enough strength to break the ’round’ level 1.3900. Now let’s look at the indicators: The currency […]

Trading results In the previous trading session, Sberbank shares fell 2.26%, closing at 268.98 rubles. The paper looked worse than the market. Trading volume amounted to 24.9 billion rubles. Short-term picture The price of Sberbank shares on Tuesday sank after four days of growth, the pace of which was moderate. On the four-hour chart, the […]

Current dynamics The price of North American light oil WTI Crude Oil is moving in a corrective trend, trading at 60.80. Oil quotes remain under strong pressure, and the main focus of the commodity market is now turned towards Europe. The massive refusal of the EU countries to use the AstraZeneca vaccine caused a strong […]

The benchmark for the Moscow Exchange index: a corridor of 3450-3500 points